The new 8800 4×6 LED headlight from JW Speaker gets really hot! This is a good thing because if people are driving large trucks through the mountains ice and snow buildup on the headlight lens can be a real safety concern. Until now, if you want a hot headlight, you needed an incandescent headlight…and nobody wants that because they’re not bright and use a ton of energy! A couple years ago Truck-Lite introduced the world’s first heated lens LED headlight housing for sealed beam applications. It was a 7″ round version

A couple years ago Truck-Lite introduced the world’s first heated lens LED headlight housing for sealed beam applications. It was a 7″ round version like this: Truck-Lite 27275C. In 2017 JW Speaker released a 4×6″ sealed beam version as one iteration of their Model 8800 Evolution 2 product line. The JW Speaker model 8800 Evolution 2 4×6″ sealed beam LED headlight housing comes in a black or chrome style, and each is available in a heated lens or non-heated-lens variant.

After 5 minutes of continuous use:

JW Speaker is a company located in Wisconsin…that actually manufactures in Wisconsin! Can you believe it? This company is one of the last big brands that keeps their building processes in house, in the USA. If that’s not enough of a reason to buy their products, think about the fact that 99% of all cheap chinese headlights coming out on the market today were inspired by these American designs, or straight-up copied! I mean, if they’re good enough to be copied, why not buy the originals?

The real JW Speaker LED headlights have a better warranty (5 years), have better fit and finish, and better light output than any of the copycat headlights you’ll find that look like these, or are “inspired” by this design.

If you’re considering upgrading your old style sealed beam 7″ round headlights to LED, you should definitely check out the Vision X Vortex headlight. This headlight has the best lifetime warranty you’ll find, and is also one of the brightest on the market today, if not THE brightest… The Low beam uses a traditional MSR (multi-surface-reflector) design, and the high beam uses the same technology as some Vision X LED off-road light bars, so you know you’re getting an amazing high beam! The Vision X Vortex comes in a black-chrome version or a polished-chrome version. Both of them have the same light output characteristics so your only decision is if you want your new headlight to be shiny or stealthy!

Did you know that the world’s first 7″ round LED headlight was invented by Truck-Lite? Today they still offer one of the best sealed beam replacement products in the world. The Truck-Lite 27270C is a solid, reliable headlight that fits any standard size 7″ round sealed beam headlight application. These are commonly used in Jeep Wrangler, classic cars, semi trucks, and RV applications.

You can find this headlight and many other 7″ round LED headlight housings at Headlight Revolution here.

One of the most important upgrades you can do to your Jeep Wrangler JK is to upgrade the original headlights with new LED housings. The original halogen bulb headlights are one of the worst ever made and the JK practically NEEDS better headlights…

The Vision X Vortex LED headlight is an amazing upgrade/replacement for your Jeep Wrangler. It’s several times brighter than the original headlights, has better lighting and beam patterns than your original headlights, and they’re totally plug and play! Probably the coolest thing about them is they have a built in LED halo and a lifetime warranty! No other LED headlight for the Jeep JK can claim that. 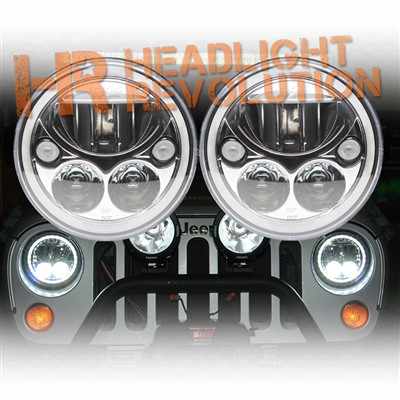 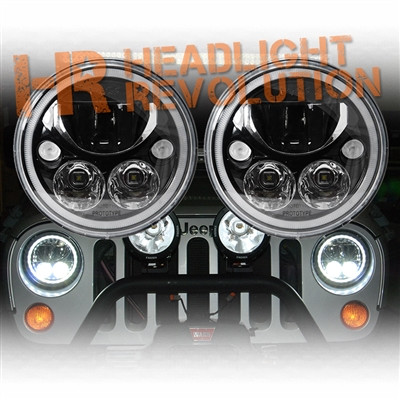 This is a loaded question… not that there isn’t a best, but the reality is there are several in the same realm that might be considered THE BEST but depending on your preference. Don’t get me wrong, there are some that are AWFUL!! But to point out 1 “best” is tough.

The JW Speaker 8800 Evolution has long since been revered as the best LED 4×6″ sealed beam headlight housing replacement on the market. However in 2016 a few other options entered the scene and there is some pretty stiff competition! So first let’s talk about what makes the JW Speaker 8800 one of the best:

The JW Speaker 8800 4×6 headlight is a single beam LED housing replacement that gives you either low beam or high beam in each housing, not both. They used to have a lifetime warranty but starting in 2017 they now only carry a 5 year warranty. They are manufactured right here in the USA in Germantown, Wisconsin, and they have one of the best and brightest beam patterns of any headlight in the world! Also February of 2017 there is a new 8800 Evolution 2 that comes in a heated 4×6″ version that is even brighter than the old one.

The Vision X Vortex XIL-46D is a new option for 2016 and the notable things about this headlight are that it comes in a dual beam configuration with both high and low beam in one housing! The Vision X Vortex and the JW Speaker 8800 are about the same brightness, but the beam patterns are totally different!

Truck-Lite was the first company in the world to make an LED headlight housing replacement for a sealed beam headlight, and they did that with the Phase 6 7″ round unit that was primarily used in the military on Hummers.  Today they make a low-cost version for the 4×6″ that is light weight, and far less expensive than the other top-tier options listed here. The trade off of course is that the Vision X 4×6 and the JW Speaker 4×6 are vastly superior in terms of light output and beam pattern, but for the money the Truck-Lite option is solid.